The latest survey from the ECB of 144 banks shows loan demand fell in the final quarter of 2019 because of lower investment needs and wider availability of alternative finance. Spain experienced the biggest decline, with a smaller fall in France and demand in Italy flat. The disappointing data could inflict another huge blow on the faltering Eurozone amid recent signs the economy was stabilising ahead of the first ECB-rate setting meeting of the year on Thursday. 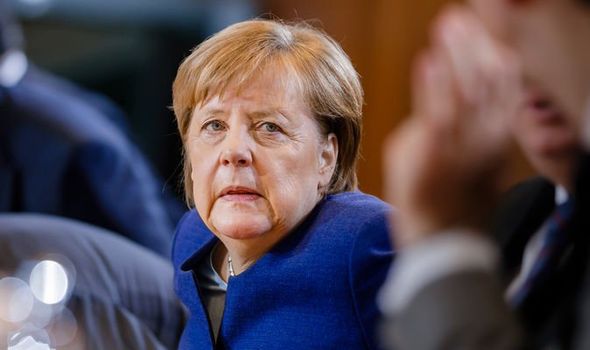 Merkel on brink: Just half of Germans have confidence in Chancellor 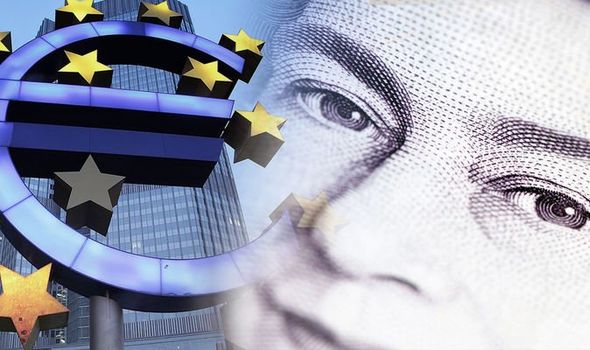 ‘So much for Brexit disaster!’ UK economy set to trounce eurozone

New ECB President Christine Lagarde, the former boss of the International Monetary Fund who took over from Mario Draghi in November, is expected to keep monetary policy unchanged.

Frederik Ducrozet, strategist at Pictet Wealth Management, said: “If there were any ideas of tightening monetary policy in the next year, then it is a timely reminder that growth remains very fragile and we will continue to see these kinds of reminders of how weak the economy is.”

The quarterly survey from the ECB asks lenders if they are experiencing increasing demand for loans from companies and households.

This is expressed as a percentage, which shows whether more banks are positive or negative about loan demand – and not whether lending has risen or fallen.

The faltering Eurozone is under pressure once again (Image: GETTY)

Christine Lagarde took over as the ECB’s new President in November (Image: REUTERS)

But in the final three months of 2019, the indicator turned negative for the first time in six years, at minus eight percent.

The indicator remained negative at minus nine percent when banks were asked about their outlook for the opening quarter of 2020.

The survey from the ECB showed demands for loans fell at companies of all sizes.

This came despite the central bank slicing interest rates to -0.5 percent in September.

The ECB said in its report: “In most countries where banks indicated a net decline in demand, fixed investment contributed to that decline, in line with subdued economic activity. 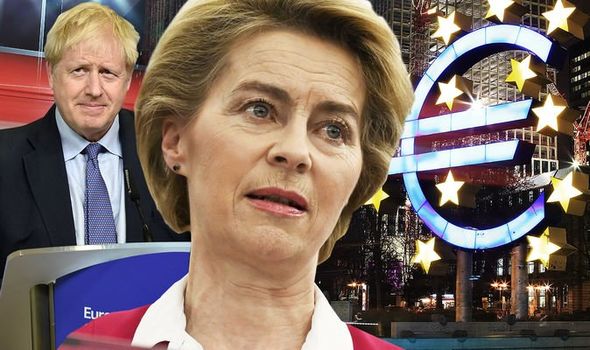 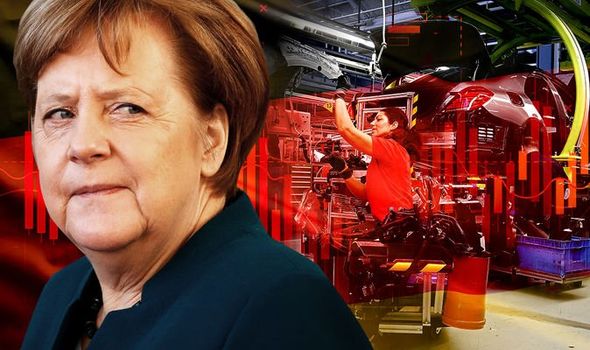 “At the same time, in a few countries, firms’ internal funds also contributed to the dampening of loan demand, pointing to alternative funding options for companies.”

This was fuelled by low interest rates and resilient consumer confidence across the majority of the eurozone area.

The Euro has come under significant pressure recently (Image: GETTY)

The ECB said: “Net demand for housing loans continued to be driven mainly by the low general level of interest rates.

Investor sentiment about the eurozone economy also continued to improve this month.

The various countries of different countries throughout Europe (Image: EXPRESS)

The latest ZEW survey of financial market experts showed sentiment in the German economy – the largest in Europe at more than £3trillion – improved to 26.7 from just 10.7 in December – the highest in more than four years.

The report said the uplift has been helped by a possible breakthrough in the global trade war between the US and China.

But ZEW President Achim Wambach warned growth in Germany is forecast to remain below average over the coming months, after plummeting to a six-year low of just 0.6 percent in 2019.